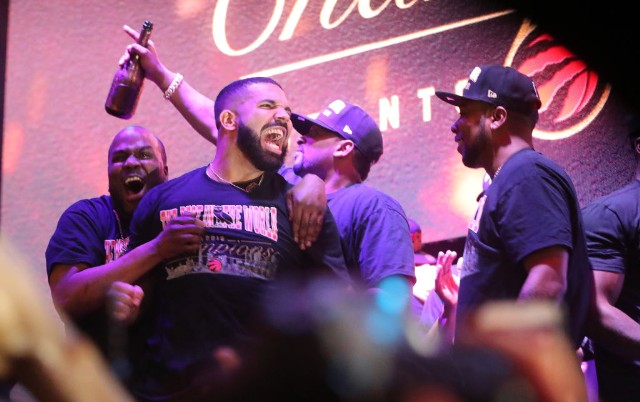 Following the historic NBA Championship win by his home team, Drake dropped two new songs that I’m just not crazy about: “Omertà” and “Money in the Grave” (featuring Rick Ross). The rapping is good, so if you’re someone who is solely concerned with lyrics, you might enjoy both songs. There are more than a few caption-worthy bars. However, if you’re looking for a summertime chune, you may have to wait till next time.

“Omertà” is making news because more than a few lines seem to reference the situation with Pusha T, with Drizzy rapping about niggas telling on him and whatnot. For those who don’t remember, Pusha T essentially forced Drake into disclosing that he had fathered a child — months before he had planned to.

There’s also a line about a traitor, which can only be about Kanye West.

The Rozay-assisted “Money in the Grave” (the better of the two, IMHO) requires less investigation. There are a few bars here that might make you wonder if he’s talking about certain people, but it’s generally just Drake and Rick Ross rapping about how much they’re winning. Check both tracks out below.


“Money in the Grave”

“Anything” by SWV is one of those songs that are burned into my brain because my elder sisters would not stop playing it. Whenever I hear it, it takes me right back to our living, where my siblings and I would huddle around the TV watching videos we had dubbed from MTV — I totally just dated myself, but whatever. It was a beautiful time and I’m glad I got to experience the anticipation of waiting for your favorite music videos to come on just so you could record and watch them whenever you wanted. You young’ns cannot begin to relate.

This week’s TBT selection is the Above the Rim version of “Anything,” which is technically a remix, but what people think of as the “Anything” remix is the version featuring the Wu-Tang Clan. The original version, featured on the group’s debut album, It’s About Time, is a ballad that is decent but somewhat forgettable.

The remix, which is based on Freedom’s “Get up and Dance,” takes the song up a thousand levels. The beat knocks super hard and Coko — who turns 49 today — sangs her ass off. The song was such a hit in our home that I was shocked to find out that it only peaked at No. 18 on the Billboard Hot 100. If only more people had taste. Click play.

Chris Brown linked up with Drake for “No Guidance,” which sounds like something from each artist’s previous albums. Though Drake is only featured on the track, he definitely gets more track time. Also, the track slows down towards the end like many of the songs on Nothing Was the Same (Drake’s 2013 LP), which makes it feel like more of a Drizzy song than a Breezy song.

Overall, “No Guidance” is right on time for the warm weather but far from remarkable. Check it out below.

DeBarge is one of those musical acts that I always seem to have in rotation. I can’t say no to a good melody and I love me a high-pitched voice — and not to mention, many of their songs are timeless. If you ever doubt this, you need look no further than the several classics that are built on DeBarge samples.

This week, the TBT selection is from DeBarge because this past Tuesday was El DeBarge’s birthday, and more importantly, why the hell not? Much like last week, I’m going with a deep cut once again because some of the best music ever made never got the commercial treatment.

DeBarge’s second studio album, All This Love, which gave us two of the group’s most notable hits — the title track and “I Like It” — had a hidden gem among the album cuts. The album’s sixth track, “It’s Getting Stronger,” can go toe-to-toe with many of the group’s biggest hits and I’m willing to fight anybody over this. The song is standard DeBarge mixed with a little a bit of disco, and the end-result is a muhfuckin’ chune. Think I’m lying? Click play.

Cardi B just dropped “Press,” a song that is very reminiscent — in production and in mood — of her breakout hit “Bodak Yellow.” As the title might indicate, Bardi is rapping about the press and how she doesn’t need more of it, which is arguably false but definitely makes for a good song lyric.

Recently, Cardi has lashed out at certain media outlets, particularly the Shade Room, for only covering negative stories about her, so one may assume that is what inspired these lyrics.

“Press” is presumably the third lead single — after “Money” and “Please Me” — from her highly anticipated sophomore album. Check it out below.

Earlier this week, during her Caution World Tour stop in London, Mariah Carey dug deep and sung the chorus of “Slipping Away,” which is a B-side that only a true R&B connoisseur would be familiar with. The song was the B-side for “Always Be My Baby,” but was never included on any of her albums — against Mariah’s wishes.

Mariah has explained on a number of occasions that the song was thought of as too “urban” for her image at the time, which may seem weird today, but if you consider her “pop” polish circa ’95, it kinda makes sense. I mean…it’s bullshit and definitely reeks of racism, but it can be explained. Sort of.

The album that it was excluded from, Daydream, also had “Fantasy” and “Long Ago,” which are certainly more “urban” if we really wanna talk about it, but perhaps Tommy Mottola had an “urban” track quota for his then-wife.

In any case, “Slipping Away” is a groovy-ass mid-tempo that will take you right back to that era of R&B. They simply don’t make ’em like this no more and Columbia Records played itself by not at least including it on Daydream. Click play and thank me later.

For some reason, I thought there was already a video for City Girls’ “Act Up,” but that’s probably a result of the million viral videos that use the song as their soundtrack. The song’s official music video dropped a few hours ago, and while I didn’t have any particular expectations, I certainly didn’t think this is what it would look like. For such an in-yo-face track, the video is pretty tame.

Lil Yachty, who wrote most of the song’s lyrics, is featured throughout the video, as well as clips of fans rapping to the song as part of the #ActUpChallenge. Peep the clip below.