Most people know Barry White as arguably the greatest barrytone — see what I did there? — to ever do it, but he was so much more than vocalist. He was a hell of a songwriter and also an orchestra conductor. The talent jumped out.

Aside from his solo singing career, he assembled and served as the conductor for the Love Unlimited Orchestra, a 40-member ensemble that backed Barry and the Love Unlimited — his trio of backup singers who also had a career of their own. The orchestra would go on to release its own singles and actually reached No. 1 in 1974 with “The Love’s Theme,” which is one of only 25 purely instrumental songs to rule the Billboard Hot 100.

On what would’ve been his 75th birthday, let’s revisit this classic, which serves as a reminder that lyrics are great, but melody is supreme. Click play.

05 Sep Throwback Thursday: Janet Jackson – “Son of a Gun (I Bet You Think This Song Is About You)” [Remix] [featuring Missy Elliott & Carly Simon]

The day after the 2019 MTV Video Music Awards, where Missy Elliott received the Michael Jackson Video Vanguard Award, Janet Jackson made an Instagram post congratulating Missy and talking about what a great person she is.

In the video, we find out that Janet’s nickname for Missy is “Jack,” which makes no damn sense. However, what was truly special about the video is that it showed us how close Missy and Janet have remained through the years.

The two icons first collaborated on the first remix of “Son of a Gun (I Bet You Think This Song Is About You),” the third single from Janet’s All for You. The album version was a duet between Janet and Carly Simon, with the latter contributing a spoken performance that is equal parts awkward and amazing. And if you’re wondering why Carly Simon was called, it’s because “Son of a Gun” samples the chorus of Carly’s 1972 hit, “You’re So Vain,” a song that is legendary because it is about three famous exes that remained nameless until 2015, when Ms. Simon confirmed that the second verse is about Warren Beatty.

Similarly, “Son of a Gun” is rumored to be about one of Janet’s exes, namely René Elizondo Jr., who she had just divorced months before the song was recorded. She has never confirmed this publicly, but given that he sued her for spousal support and she talks about a greedy motherfucker in the song, I’d bet money on it.

On the remix, which is about two minutes shorter than the original, we get two verses from Missy and a lot less Carly. There’s a second remix with Diddy, but it doesn’t quite knock like the first one.

Janet co-wrote and co-produced “Son of a Gun” with Jimmy Jam & Terry Lewis (along with the featured performers). Unlike most of their other collaborations, this track is not so melodic, but the result is the same: magic.

The song’s video features Janet, Missy and a gang of sexy lady ghouls haunting a man as he runs through the Biltmore Hotel in Los Angeles. You love to see it.

Skai Jackson can’t seem to get away from Lil Nas X in the “Panini” video, which dropped earlier today. The video is set in the future — complete with hologram billboards and flying Ubers — and features the same weak-ass choreo from the VMAs. Check it out below.

Almost a month after the song’s release, we now have a video for “Hot Girl Summer” and it is meh at best. Comedian Jaimesha Cole makes an appearance in the video, as do Rico Nasty, Summer Walker, Ari Lennox and LaLa Anthony. Check it out below.

Michael Jackson’s “Thriller” video is so highly regarded that people often forget that he has other videos that are just as good. “Remember the Time” serves as a perfect example.

Written by MJ, Teddy Riley and Bernard Belle, “Remember the Time” was the second single from the Dangerous album. Teddy brought the new jack swing vibes he was known for, while Michael brought magic he brings to every song, and the result is a timeless chune.

Even without a video, “Remember the Time” is a standout in Michael Jackson’s discography, but then the King decided to go awf with a short film featuring an all-star cast of Black Hollywood royalty. Directed by the late great John Singleton, the video is set in Ancient Egypt and features Michael Jackson as a dancing-ass wizard, Eddie Murphy as the pharaoh, and Iman as his queen.

Between the story line, the special effects and the choreography, the “Remember the Time” video is simply iconic. I watch it in awe today as I did when it was first released.

On his 61st birthday, let’s take a moment to remember the time when MJ used to mesmerize us with classic after classic. He was truly a master at his craft, and as the years pass, it becomes clearer that no one did it quite like him.

The 2019 MTV Video Music Awards was the least-watched one yet, with only 1.93 million viewers tuning in. Many will be quick to blame the quality of the performances, and while some were trash, it wouldn’t be a fair critique — last year was definitely worse. The fact of the matter is that these Generation Z kids and younger millennials don’t care about award shows the way previous generations did. Also, the fragmented nature of media in 2019 makes it harder to get large segments of the population to watch the same thing at the same time from start to finish.

But enough media analysis, let’s talk about the show.

Taylor Swift’s “You Need to Calm Down” took home the Video of the Year award while Ariana Grande won Artist of the Year. Quite frankly, none of this really matters because MTV is no longer the institution it once was. For a full list of winners, click here.

This year’s VMAs gave us a few amazing performances. Normani performed “Motivation” for the first time (and killed it), Missy performed a medley before receiving the Michael Jackson Video Vanguard award (more on that later), and then there was Lizzo.

Without a doubt, Lizzo owned the night. Her performance started with her current hit, “Truth Hurts,” and then transitioned into what is arguably her breakthrough hit: “Good As Hell.” The latter didn’t chart until very recently, but for over three years, we have heard it in movies and commercials. Lizzo’s performance was all about self-love, especially for those who get very little love from the world around them. If you weren’t feeling good ass hell by the end of her performance, check your pulse.


The VMAs took place in Newark, NJ, this year, and in honor of the city, we got a medley of some of Jersey’s greatest. Queen Latifah, Redman, Fetty Wap, Naughty By Nature and Wyclef Jean gave me the performance I didn’t know I needed, so it definitely deserves an honorary mention.


There were also performances by Lil Nas X, the Jonas Brothers, Shawn Mendes, Camila Cabello, Rosalia, Ozuna, J Balvin and Bad Bunny. Lil Nas X performed “Panini” and I have never been more disappointed. Instead of just rocking the mic the way such a song demands, he lip-synced the whole thing a la Britney, except he didn’t have the moves to justify that. Horrible performance.

Speaking of horrible performances, Taylor Swift plays too damn much.

Now, back to Missy. Her performance was great, but for an artist who has had so many iconic collabos over the years, we could have used a guest appearance or two. Yes, Alyson Stoner (a.k.a. the lil white girl from the “Work It” video) made an appearance and it was cute, but that is not nearly enough. We needed Timbo or Luda or Da Brat or SOMEBODY.


It was a decent performance, but we were def left wanting. The only consolation is her insistence on referring to the award as the Michael Jackson Video Vanguard even though MTV dropped the King’s name from its title. We stan a loyal, defiant queen.

More than two months after it’s release, we now have a video for “Money in the Grave,” and it is as unexciting as the song. The one positive is that it features an actual digging of a grave — it would have been a criminal omission. Check the video out below. 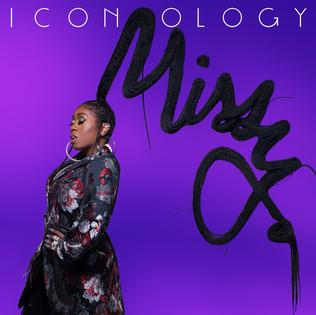 Just days before she is slated to receive the Michael Jackson Video Vanguard Award at the 2019 MTV Video Music Awards, Missy Elliott dropped Iconology, a five-track EP that slaps from start to finish.

The first track, “Throw It Back,” is a repetitive-ass banger that will have you singing along in no time. It is followed by “Cool Off,” a two-minute banger that reminds you just how much of a rapping-ass rapper Missy is, and then “DripDemeanor,” a baby-making song featuring Sum1 on the hook.

The last two tracks are two versions of the same song: “Why I Still Love You.” Track 4 comes with production, while Track 5 is acapella — Missy teased the latter on Instagram months ago. I fell in love with it then, and the full song definitely lives up to the promise of the snippet. Both versions of the song are [fire emoji] and serve as a reminder of what an amazing vocalist Missy is and just how well she writes R&B music.

After almost a quarter-century in the business, Missy Elliott’s creative juices are flowing better than those of your favorite new artist, and Iconology is a testament to that. She is truly a genius and it brings me joy to see her receive her flowers while she can smell them. All hail Queen Missy.

Super Duper KYLE just dropped “F You I Love You,” which features Teyana Taylor. The song, written by the duo, is a mid-tempo R&B cut that puts you at ease with its simplicity — a simplicity that almost feels cutting edge in an era where everybody is trying their best to be a weirdo.

As the title might indicate, it is a song about a love/hate relationship. The video shows the singers playing a couple in the most colorful apartment you’ve ever seen. The camera follows them from a million different angles as they bicker — we have Teyana (a.k.a. “Spike Lee”) to thank for the visuals.

“F You I Love You” is one of six new songs on the deluxe edition of KYLE’s Light of Mine, which dropped on Friday. Check the video out below.

Missy Elliott just dropped an EP called Iconology, and it came with a video for “Throw It Back,” one of the project’s five tracks.

The video sees us following a little girl who somehow ends up in a Missy wonderland — with the help of Teyana Taylor. In this wonderland, we get all the choreography and special effects you’d expect from a Missy Elliott video.

The song doesn’t jump at you right away, but before it is over, you will probably find yourself nodding along. It is classic Missy, but something about it feels very current. The bass line will remind you of Drake’s “Nonstop,” except it’s arguably better. Summer would’ve benefited from this song being released a few months earlier, but we’ll take what we can get.

One key observation is that the video shows Missy in the moonman outfit that had been used to promote her upcoming Video Vanguard bestowment at the MTV Video Music Awards. It’s not clear which came first, but it makes you wonder if Missy is receiving the award because MTV wanted to give it to her or if Missy’s team coordinated it. Either way, she deserves it and is long overdue. Watch the video below.