The “I’m the One” crew (minus Weezy) is back together for this muhfuckin’ chune. I think we might finally have that song of the summer we’ve all been waiting for — “Nice for What” is nice, but it came a little early, and “In My Feelings” ate through the bottle quickly because you people won’t stop making challenge videos (still my jam, though). “No Brainer” jumps at you immediately and the video is just right. We are thankful.

I’m calling it now: This song is gonna debut at No. 1 on the Billboard Hot 100 next week. Watch the video below.

“No Brainer” is the second single from DJ Khaled’s upcoming studio album (his 11th one), Father of Asahd (due October 19).

Oh my god, he always wearing red, he a super blood.

First of all, I’m many years late because I had no idea YG was a blood, but those red outfits all make sense now. The A$AP-Rocky-assisted “Handgun” is all about that Draco, and while I can’t stand guns and anything that glorifies them, this song isn’t half-bad. These days, I’m just thankful whenever I hear a rap song that doesn’t have that one trap bassline that they all seem to be using right now. Watch the “Handgun” video below.

27 Jul Mariah and Britney on the Same Song? 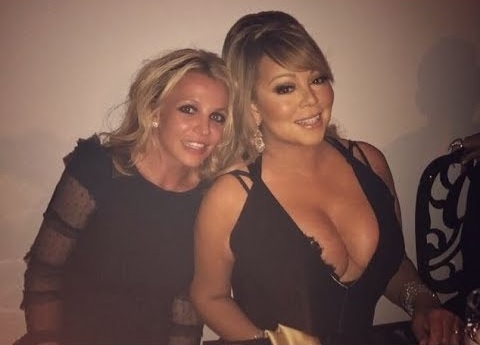 For weeks if not months, there have been whispers on social media about a potential collabo between Mariah Carey and Britney Spears. Yesterday, for Throwback Thursday, Mariah posted a pic of her and Britney from 1999 and captioned, “We need a new pic, Brit.” While this could very well be a random posting, it seems a little too timely and the caption comes across very familiar — like they’ve been hanging out recently. Also, it’s not unusual for Mariah to give social media nods to collaborators right before she releases the music they’ve worked on together — she gave Miguel a seemingly random shout-out right before “#Beautiful” dropped.

As far as star power is concerned, we don’t get many collaborations like this. However, I’m struggling to imagine what a song with those two voices would sound like. In the mean time, watch Mariah saying that she loves Britney on an episode of Watch What Happens Live (skip to the 2:00 mark).

You guys don’t show him any respect, but Usher is one of the greatest artists of all time. His accomplishments kinda speak for themselves, but unfortunately, it always takes longer for the industry to recognize contemporary R&B artists — more specifically, black contemporary R&B artists — for their contributions. I already know that Justin Timberlake — a lesser artist with fewer years in the game — will be inducted into the Rock & Roll Hall of Fame before Usher (who actually became eligible for induction a month ago). And if you doubt any of this, I’d like to call your attention to the fact that Janet Damito Jo Jackson (who has been eligible since 2007) still hasn’t been inducted. What a world.

Anyway, the Throwback Thursday selection this week is Usher’s breakthrough hit, “You Make Me Wanna,” released in August 1997. Co-written by Ursh, Jermaine Dupri and Manuel Seal, the mid-tempo jam was the lead single from the My Way album and, along with its video, became the new blueprint for young male artists who sang contemporary R&B and, dare I say, pop. The song peaked at No. 2 on the Billboard 100, but it was No.1 in our hearts. Watch the video below. 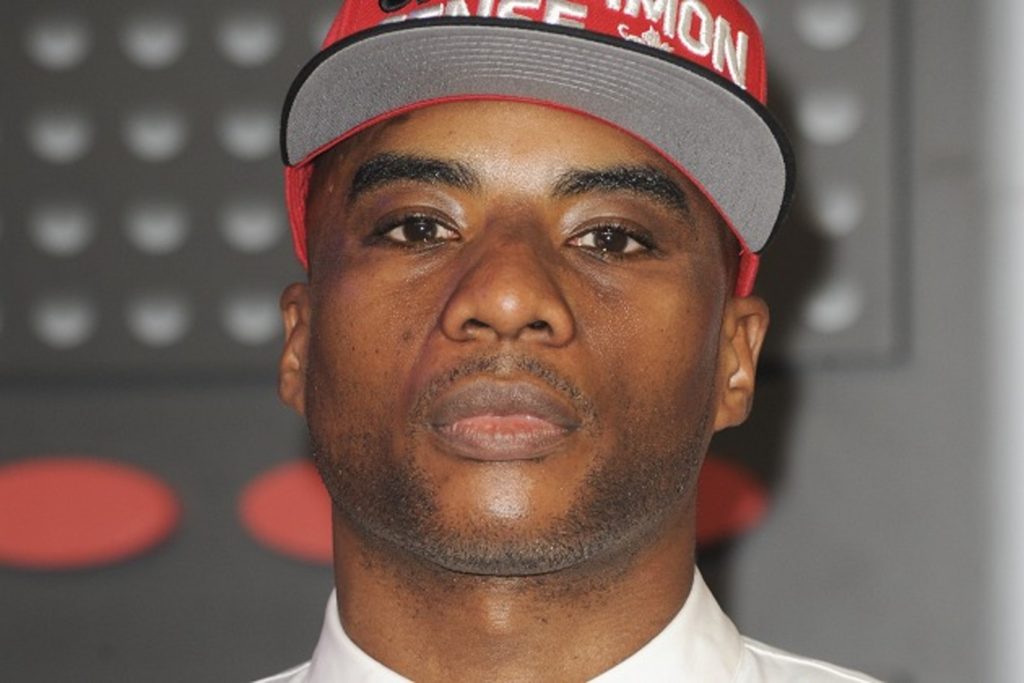 Charlamagne Tha God has made a career out of tearing famous people down, and while this isn’t necessarily unique to him, Charlamagne does it in a way that is often gratuitous and particularly mean — like calling Chingy’s albums “weed plates” to his face in a 2007 interview (back when he was still the Robin to Wendy William’s Batman). Like every skilled bully, Charlamagne is good at preying on people who are least likely to clap back (e.g. Chingy) or have few allies who would clap back for them (e.g. Monique).

While this behavior has won Charlamagne many fans, there is a growing number of people (like myself) who find it disgusting, and as his profile grew, I knew it was only a matter of time before people dug something up from his past. That finally happened this past week, where years-old statements about domestic violence and questionable sex encounters resurfaced.

In a 2013 interview with VladTV, Charlamagne recounts the assault of a girlfriend in his teenage years, and says every guy has “put hands” on a woman at some point — totally false. Also, a quote about his first sexual experience with his wife (back when they were teenagers) is raising eyebrows:


“I keep telling’ y’all. I’ve told y’all this over and over. It’s a lot of things guys did especially when we were young that were rape that we just didn’t consider rape. I’m married to my wife. Me and my wife dated for a whole year, she would not give me no pussy. Me and my wife hung out one Saturday night and she got sloppy drunk and passed out in my momma’s house and I got that pussy. She was f*cking me back and all that but she was really drunk. I asked her yesterday, ‘Yo, did I rape you the first time we ever had sex?’ And she goes, ‘I mean in hindsight, yeah…’”

Charlamagne has since gone into full crisis management mode, releasing a lengthy audio statement last night and then having his wife call into The Breakfast Club this morning to say that he never raped her. Watch the video below.

If you can’t already tell, it’s Tekashi Day here at No Hipsters Allowed. The rapper just dropped a video for “FEFE.” Check it out below. 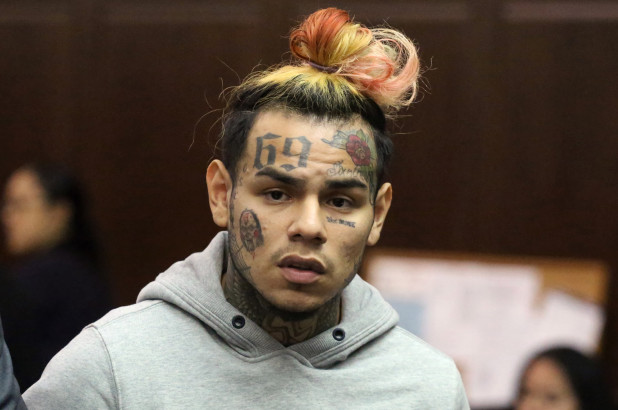 A few hours ago, 6ix9ine was pistol-whipped, kidnapped and robbed. The incident is said to have taken place in the driveway of his home, where three hooded gunmen ambushed him. They stole $750,000 in jewelry and over $15,000 in cash. He has since been admitted to the hospital; TMZ has a detailed account of what happened as well as a new pic of Tekashi at the hospital after the incident (see pic below). 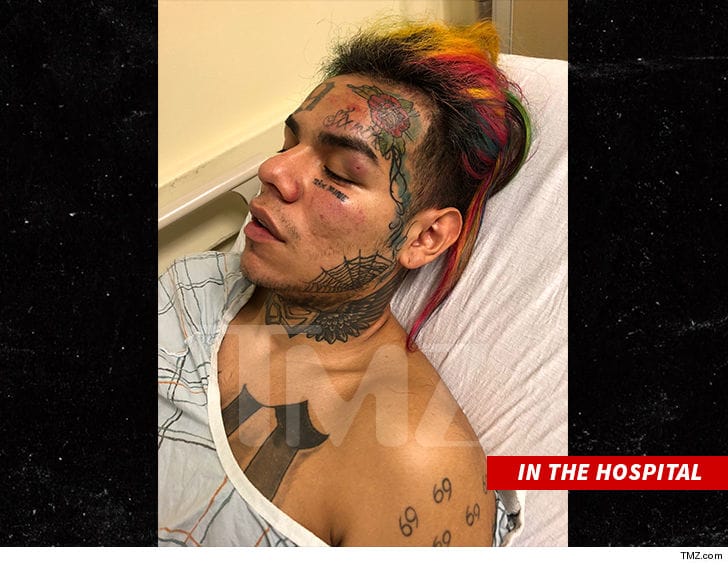 The cynic in me wonders if this is a publicity stunt because Tekashi is good for the shenanigans, but if not, it brings us back to his reckless courting of danger these past few months. No one deserves what happened to him, but he has been kinda asking for it for a while now. I wish him a speedy recovery and I hope he cuts the bullshit out.

So…6ix9ine and Nicki Minaj dropped a collabo a few hours ago, and ummmm…it’s not bad, I guess. I made the grave mistake of reading reactions (or, shall I say, overreactions) on the internet, so I had high hopes. I’ll concede that I’m inclined to all things melodic, so on a “gully” track like this one, I need the bars to be A1, which they are not. Check it out for yourself.

King Combs (a.k.a. Diddy’s son) just put out a video for “Love You Better.” The track samples Case’s “Touch Me Tease Me” (featuring Foxy Brown & Mary J. Blige) and has Chris Brown on the chorus. And DJ Khaled is in the video being loud as fuck. Check it out.

In case anyone was wondering, Roseanne Barr is not really sorry for the racist comments she made about Valerie Jarrett. She posted the video below to her YouTube page yesterday.


It’s supposed to be an “explanation.” She will eventually be welcomed back to Hollywood with open arms, but for now, I’m just happy she lost her show.