This is the first single off Swizz Beatz’s Poison that I don’t hate. And I haven’t been motivated to listen to the album because all the people who’ve told me they like it have terrible taste in music.

Anyways, watch the “SWIZZMONTANA” video below.

Ariana Grande is giving us celestial vibes in the “Breathin” video — much like the “God Is a Woman” video. There’s no real plot line. Just Ariana looking pretty. Check it out below.


In just five hours, the video has racked up 1.3 million views. Expect it to be in the top 5 on next week’s Billboard Hot 100.

As far as EDM songs go, “I Found You” is very standard — in melody, production and lyrics — and I ain’t mad. The video includes appearances from Tory Lanez, Halsey and Benny Blanco’s mom. Check it out below.

Still relatively fresh off her break up with Pete Davidson, Ariana Grande released an ode to all of her exes — Big Sean, Ricky Alvarez, Mac Miller and Pete Davidson — thanking them for what they taught her.

She name-checks all of them in the opening verse, calling Mac Miller an angel. If the title of the song sounds familiar, it’s because she had tweeted the same words in what was deemed a subtweet at Pete Davidson, who can’t seem to stop talking about Ariana. However, just hours before she was being released, she tweeted that there was “no shade” at all. She also revealed that she let her exes hear the song before it was released.

In any case, the song’s dope. Something about it reminds me of Beyoncé’s “Love Drought”; their tempos are different and “Thank U, Next” has a lot more bass, but there are similarities. If you’re interested in testing my theory, sing “Love Drought” (at a sped up pace) over this beat.

Listen to “Thank U, Next” below. 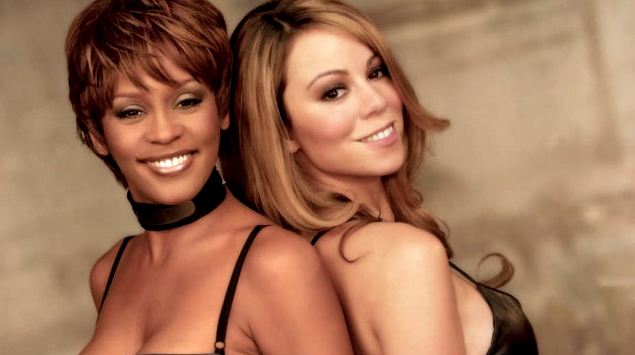 Twenty years ago today, the world got to hear two of the greatest vocalists of all time on one song: “When You Believe,” a duet between Whitney Houston and Mariah Carey, hit the airwaves. The song was special not just because they were two of the most popular artists of all time — it was special because the two artists were believed to be feuding. For eight years leading up to that collaboration, the two had been pit against each other in the press, and for a while in the early ’90s, Whitney routinely shaded the fuck out of Mariah.

(Sidebar: It was a respectful kind of shade, if you will. The kind of shade you throw at a formidable opponent — unlike the way she shaded Paula Abdul. Mariah, on the other hand, never retaliated because she respects Whitney. Madonna wasn’t as lucky.)

In order to make the collaboration happen, Babyface — who co-wrote and produced the song — is said to have told both artists that the other had agreed to collaborate (before this was actually true). His plan worked, and the rest history. And unlike Nicki Minaj and Cardi B, whose relationship worsened after their collabo, Whitney and Mariah ended up becoming friends.

“When You Believe” peaked at No. 15 on the Billboard Hot 100; considering the two artists involved, this was far below expectation. However, it performed much better across the world, reaching the top 5 in the UK and France. The song, which was on the soundtrack of The Prince of Egypt, won the Academy Award for Best Original Song, which is a songwriter’s award. Babyface, who co-wrote the Nippy and Mimi version, didn’t share in the glory because bitch-ass Stephen Schwartz, who wrote the initial version of the song (which appears in the movie), left Babyface’s name off the submission to the Academy. Stephen’s a hater.

Anyway, join me in this beautiful walk down memory lane.

Cardi B is rapping/singing in Spanish on El Alfa’s “Mi Mami.” I don’t understand more than five words on this song, but I think I love it. I also like the video, which includes disco balls in a shopping cart, a diamond-encrusted banana, talking pineapples and a giant bag of pop corn. Check it out below.

Yesterday was Halloween, so I had to do a spooky one for this week’s TBT post. “Thriller” would’ve been too obvious, so I thought I’d go with “Ghosts,” one of favorite Michael Jackson’s most underrated songs/videos.

“Ghosts” was supposed to be part of the soundtrack for Addams Family Values, but when negotiations fell through, MJ decided to make a short film out of it — it was featured at the Cannes Film Festival n all dat. The storyline was co-written by MJ, Mick Garris and Stephen King, who included the film with selected releases of his 1996 move, Thinner. In a 2017 interview, Garris claimed that the project cost $15 million, all of which came out of Michael’s pocket. Technically, that makes it the most expensive music video of all time, but some would argue that it was a theatrical release rather than a music video.

The song, written and produced by MJ and Teddy Riley, never charted in the US because of the weird chart rules back in the day — songs needed to have retail releases to be eligible. However, it was a major hit all around the world, peaking at No. 5 in the UK. Watch an abridged version of this classic below.

Mariah Carey is putting out good music and it kills me that she’s getting zero play. Ahead of the November 16 release of her 15th studio album (Caution), Mimi has released a fourth song, titled “A No No.” Judging from promotional activity, it’s not clear if this song or its immediate predecessor, “The Distance,” are singles in the traditional sense, but we do know that they are being used to create “buzz,” if you will. This must be what Mariah’s team means when they distinguish “promotional singles” from actual singles.

In any case, “A No No” is dope. Like…DOPE. Even better than “The Distance,” and I thought that was her best song in a decade. The song samples the Jeff Lorber Fusion’s “Rain Dance,” made famous by Lil’ Kim’s “Crush on You” (featuring Lil’ Cease), which is also interpolated in the track.

Vocally, Mariah hasn’t sounded this confident and vibrant in a long time. This might have to do with the fact that the song is supposedly a personal one — it is said to be about Mariah’s ex-manager, Stella Bulochnikov, who allegedly stole money from Mariah and then tried to destroy her after she got fired. That long streak of negative news stories about Mariah in late 2017 — from the lipo to allegations of sexual assault — are widely believed to be the handiwork of Stella. Oh, and remember when Mariah revealed that she had bipolar II disorder? That only happened because Mariah got word that Stella was trying to expose her.

Anyways, now that we have some context, listen to the song below.

A month-and-a-half after the audio dropped, we now have a video for “Wake up in the Sky.” It’s all very retro, so you know this was Bruno Mars’ idea. Watch below.

I love a video that looks like it was made with care. Everything about the “Dip” video is dope. The all white background, the catsuit mannequins, the violins playing themselves, everything. The song is also dope. Check it out below.